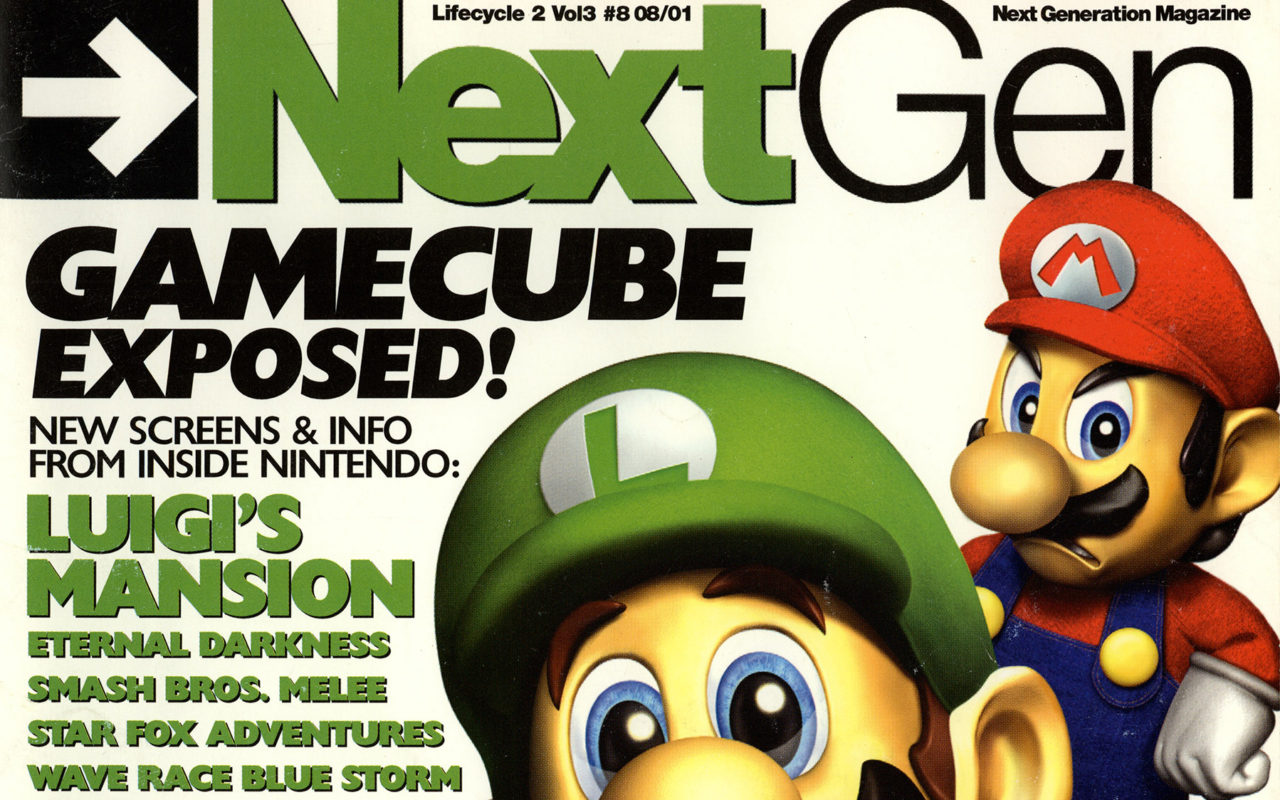 The notorious Second Fiddle society whose roster includes such has-beens and never-weres as Art Garfunkel, the other guy from Wham!, and John Oates, will see its membership shrink in rather short order; perennial videogame guest star and bit player Luigi will lose his membership card when he steps out from his superstar brother Mario’s immense shadow with the release of Luigi’s Mansion.

“ Luigi’s Mansion is a massive game,” says Nintendo Director of Game Evaluation, Ken Lobb. “Mr Miyamoto knew it would be a GameCube title, and he’s been working on the design for 18-plus months.”

The high concept of Luigi’s Mansion has the green-hatted hero inheriting a creaky old mansion that happens to be infested with spooks and specters. Armed with a flashlight and a ghostbusting vacuum cleaner; Luigi must work his way through haunted rooms sucking up paranormal pests. Capturing the ghosts plays a lot like a fishing game. When a room has been successfully de-ghosted, players can scoop up bonus coins.

Equally bold and beautiful, Mansion establishes GameCube as a graphics powerhouse. Realtime lighting and shading ensure that creepy shadows are thrown across every floor and hallway of this maniac mansion. Sharp particle effects and environments that actually quiver when exposed to the suction of Luigi’s vacuum add considerable punch to the proceedings.

Still, this Ghostbusters takeoff smacks of Nintendo’s signature “family fun” and has the potential to get a little repetitive. Unless a dose of adrenaline is administered soon, Luigi’s Mansion may sell a million copies, but get by more on marketing than merit — Greg Orlando

Eternal Darkness is built to disturb you in the same vein as Rosemary’s Baby and Psycho. Players can expect their eyes to deceive them, the game to lie to them, and all manner of impossibilities to be presented as feet.

Eternal Darkness” 12 playable roles span 2,000 years of history, and the game follows the central character of Alex as she finds a book whose stories take her into the diverse cast of other characters. Playables in the demo include Alex, a Roman centurion, and a Templar knight. Not playable were an action-oriented archaeologist similar to Indiana Jones and a Franciscan Monk who’ll be called upon to solve puzzles.

What sets apart Eternal Darkness from other horror games is a fiendish “insanity meter” that can cause hallucinations, dream sequences portending a character’s demise, and the seeming disappearance of a full inventory. It will also, though not included in our E3 demo, tweak camera angles to alter perspective.

Although Eternal Darkness will take about 40 hours to finish, there are enough options to make it worth playing several times. “Similar to the movies Go and Pulp Fiction, you get different perspectives on the same timeline of the story” explains Nintendo Producer Henry Sterchi. “You don’t realize the significance of your decisions until you play through the game and see the impact of your choices.”

Eternal Darkness” smart camera system seems to address the usual problems that plague most third-person adventures. To facilitate combat, the view tightens behind a character but expands to a more overhead view during exploration. A big plus is the minimal load times between rooms — a welcome contrast to most PS2 games. There actually were no load times,” reveals Sterchi, “but people were getting disoriented when they entered new rooms, so we put in that brief black transition.”

Eternal Darkness is fer from finished, but what was shown at E3 held much promise for Nintendo fens less interested in karting. If the game delivers the mind-bending experience it promises, it will be a fearsome piece of GameCube ammunition. If it delivers even half of that, it will make the anticipation for its release seem nothing short of, well, eternal. — Greg Orlando

Expect EA’s newest 10-yard fight to hold a new training mode where Coach Madden himself explains and diagrams the various plays, as well as a frantic “two-minute drill” mode that tasks an offense to score points under an extreme time limit.

As this console standby comes to GameCube, EA has implemented a new face- and body-shape technology; gone are the cold and soulless player visages that haunted Madden 2001 for PS2.

“GameCube can push more polys around with higher-resolution textures than PlayStation 2,” says Jeremy Mauser; senior producer for Madden NFL 2002. “We were able to make blockers react more intelligently in pass blocking, run blocking, and open-field blocking situations. To see a pulling guard just pancake a cornerback who presses up is a beautiful thing.”

Though the law of diminishing returns dictates that Madden NFL 2002 won’t be exponentially better than the near-flawless Madden 2001, players should delight at the game’s ever-upward trend — and its new face on a new console. — Greg Orlando

Return of the Button Smashers

Super Smash Bros. Melee picks up where the Nintendo 64 beat-’em-up Super Smash Bros, left off — that is, with all of Nintendo’s lovable characters gathering to beat each other insensate. This one- to four-player game features such Nintendo mainstays as Mario, Donkey Kong, and Pikachu, as well as some new bruisers with Bowser; Princess Peach, and Ice Climber (who appeared in Ice Climber for NES).

“You think this is just a simplistic game,” says Nintendo’s Ken Lobb, “but when you play against people who know what they’re doing, it’s as deep as any fighting game ever made. That’s amazing when you consider this game uses only three buttons.”

Equally important as each character’s offensive moves is the skill with which they can keep from being knocked off the platforms — the ultimate goal, after all, is the videogame equivalent of King of the Hill.

More means better; and Nintendo has added a side-scrolling feature to the single-player mode, a brand-new tournament option that will support 64 contestants, as well as a trophy gallery with hundreds of Nintendo character trophies to earn. Nothing revolutionary here in terms of gameplay, but Super Smash Bros. Melee should attract its share of button mashers. — Greg Orlando

Is it RTS or ant farm? Try a little of both

Has Shigeru Miyamoto, the man who’s created many of the best games ever, finally gone off the deep end? Miyamoto has created the kooky “inventive life simulation” Pikmin, part realtime strategy and all weird. The single-player Pikmin takes its inspiration and design from Miyamoto’s garden; the game features an unnamed bulbous-nosed spacemen who crash-lands on an alien planet and must make use of native plant creatures (called “Pikmin”) to recover all the pieces of his demolished spaceship. “After playing Pikmin, kids will want to explore their own backyards in search of Pikmin sprouts,” he says about his newest game.

A cross between the Teletubbies and the Morolians from Space Channel 5, the cutesy Pikmin may become Nintendo’s next merchandising bonanza. Will it become the next addictive videogame? Like other RTS-style titles, it may appeal to gamers who can sit down and play for hours at a time, but we found it was tedious to complete the first few objectives. This is probably not going to be the cup of tea for those who want a “pick up and play” experience. – Greg Orlando