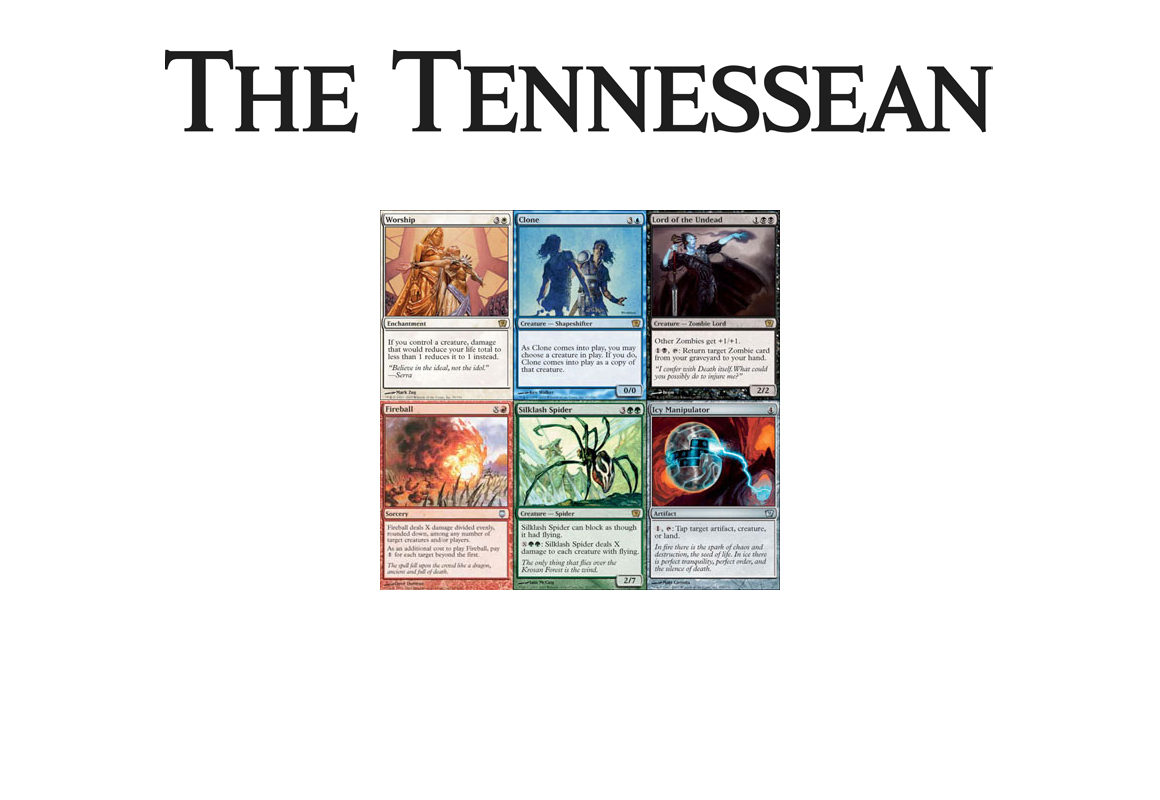 Do You Believe In Magic?
It’s All In The Cards For Players Of Magic, The Gathering
By Greg Orlando

Demystifying Magic
A lot of eight-year-olds can play and, more importantly, understand Magic’s rules.
You can too.
The game is designed for two or more players and each magician deals doom and destruction from a 40 (or more) card deck. Magic cards are usually sold in comic book stores and baseball card shops; a starter deck of 60 cards and a rule-book runs about $8.
The rules put no limit on the amount of cards a player can use to play the game. Each deck must have at least 40 cards, though, and every player draws a hand of seven cards.
In Magic, land is roughly equivalent to power. Each piece of land, be it swamp or mountain, forest or island, contains life (or death) energy. A player builds a power base by dropping down land and “tapping” its life-force or mana. Mana can be used to cast spells, summon creatures and otherwise wreak havoc.
A coward may die a thousand deaths. Playing Magic, he or she might die a thousand and two. There are a lot of ways to die in this game. There are even more ways to kill. Thad Clark, 13, usually uses what he calls a “quick-kill” deck. He avoids using monsters to do his dirty work and instead concentrates on spells that deal damage to the other player directly. While his opponent might decide to attack with an army of monsters, Clark prefers to just toss a few lightning bolts. Others are monster backers, viewing them as the most efficient way to do damage with the added advantage that they stick around until they’re killed while spells can only be used once.
Herein lies Magic’s grand appeal: variety. In the game, sorcery comes in five distinct flavors or “colors.” Green magic takes its strength from the forest, for example, while black magic flows from the death and decay of swamps and bogs.
Each type of magic comes with its 0wn distinct spells and creatures to summon; the powerful, man-eating. monster-chewing, fire-breathing Shivan Dragon can only be conjured with red magic, for instance. Smart wizards will work two or three colors of magic into their decks.
Even smarter wizards will find out what color magic their opponent fancies before picking their own. Each color has its Achilles Heel, and it’s always a good idea to pit strength against weakness. Black Magic is traditionally foiled by either white or green. Green magic is weak against black and blue.
Would-be magicians can customize their decks and tailor their attacks. Each creature, from the lowliest Ornithopter to the near Schwarzenneggeresque Cosmic Horror, comes with a power and toughness rating. Power indicates a creature’s ability to soundly drub another creature. Toughness measures how much of a drubbing a creature can take. With the right spell, a wizard can either pump a creature up (power-wise) or deflate it. Cast a giant growth spell and even the wimpiest monster will become a fearsome fighting machine.