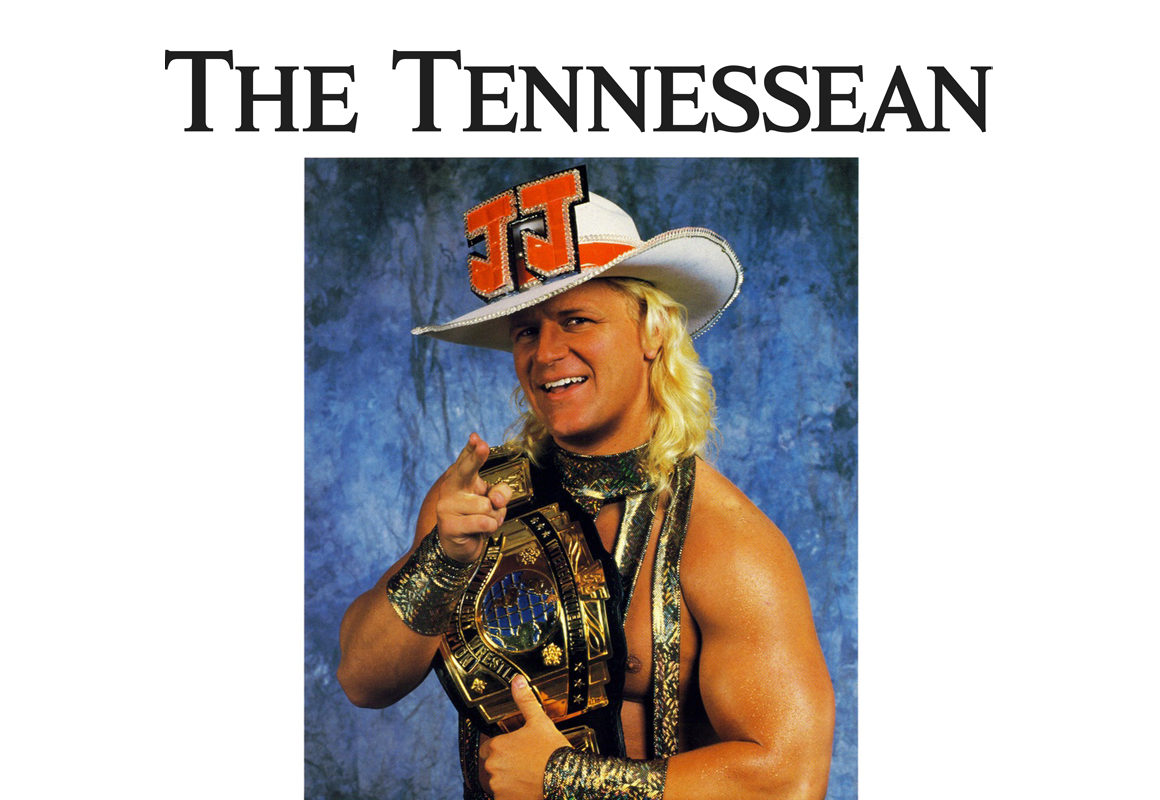 In the sunlight, wrestler and wanna-be country music star “Double J” Jeff Jarrett’s attire might give even the recently interred a headache.

While being interviewed, he was wearing a blinding white sleeveless shirt adorned with approximately I million gold sequins. Despite any claim to the contraiy, there is no way Jarrett’s Allure is even half as bright as his suit.

Jarrett, who was born in Hendersonville, was in town recently to shamelessly promote the World Wrestling Federation’s “In Your House” pay-per-view event at the Nashville Municipal Auditorium tomorrow. Forgetting that William Shakespeare once wrote, “There is nothing new under the sun,” Jarrett boas. that Sunday “will be a night of firsts.”

Among other things, the event mark the first time the WWF has held a pay.per-view event in Nashville and the (Int time Jarrett defends the WWF Intercontinental Championship in his hometown. Also, a very big also, Jarrett says “In Your House” will mark his public singing debut.

Inside the ring, .Ianett is a good heel, who, much like a smarmy politician, will do anything to win. He took the IMF, highly coveted Intercontinental Heavyweight Championship from “Razor” Ramon. Jarrett was wrestling Ramon and the then-champ was lawcked from the ring. In a move that was just slightly short of legal, Jarrett’s friend and confidant “The Roadie,” cheap-shotted Ramon outside the ring, costing him the match and the title. To say the fans boo Jarrett’s antics is to delve into understatement

Catch him on a sweltering Nashville afternoon, and Jarrett will show a different side. In person and away from the ring, he seems rather sedate and thoughtful. His favorite food is his own home cooking. His philosophy on life is “live as if you know, because you do.” He believes a wrestler’s persona is basically an extension of his personality but will deny that this means he is, at heart, a bad guy,

“The fans decide on who’s good and who, bad,” he says.

Good or bad aside, Jarrett is definitely cocky. The white suit he wears into the ring is a monument to the human ego. The initials “II” appear no less than four times on the outfit and. when the lights go out in the arena, the suit lights up in a garish display. to rival ally Las Vegas production number. He says it is only a matter of time before his first album, Ain’t Great, is released.

He says the weirdest thing that ever happened to him in the ring was getting beat. Once.

At “In Your House,” Jarrett mill take on Shaun Michaels aka ‘The Heartbreak Kid.” The winner will walk away with the Intercontinental title. The loser will have a long. depressing walk home. That is, unless Jarrett loses.

For him, Nashville is close to home. Real close. “The best part about Nashville?” Jarrett stops to think for a moment “That Double J lives here.”